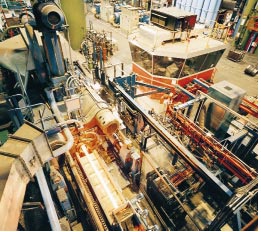 While Monel 400 offers superior resistance to SCC in aerated acid, it is not adequate to prevent damage. Monel K500 and 400 grades are exposed to corrosive conditions in vapor phase of hydrofluoric acid in the presence of oxygen. Studies emphasize the need to eliminate air in the vapor phase above the acid. As HF alkylation units are carefully maintained to eliminate oxygen, the minor difference between these two alloys is not a determining factor. It is suggested that gauges desired for direct HF service ensure that they are free of residual water. If air cannot be removed from the process, a diaphragm seal should be used.

A full scale pressure of the gauge chosen should be about two times the required service pressure, the maximum pressure should not be above 75% of scale range. Liquid filled and throttled should be used on pump discharge lines or where there is vibration or pulsation.
As the tube of many pressure gauges comprises a dead end cavity and as air causes scc, it is essential that a newly configured gauge be evacuated and back-filled with an inert gas or liquid. It will prevent holding air in the highly stresses end of the tube. It is understood this step is commonly a part of repair processes for HF alkylation units. The step should not be ignored as because a nominal magnitude of air is included in changing a gauge. Air stored in a tube will be in a location where it can cause the maximum damage. When the lines cannot be purged and only a gauge is to be changed, it could be evacuated and back-filled with inert gas or liquid, stored or sealed as long as immediately before installation.

A study on the application of Monel bars in hydrofluoric acid states that most articles describe the stress corrosion cracking behavior of Monel in HF acid. While a nominal variation in the behavior of Monel 400 and K500 is noticed in aerated HF vapors, there was significant overlap in the outcomes. Cracks were initially noticed in the samples of K grade within a week, while in Monel 400 within 15 days. Both alloys experience cracking in aerated HF vapors.

The main difference in performance of these alloys is feasibly due to higher hardness of Monel K500 grade specifically in the age hardened condition. Monel 400 may be prone to scc in moist vapors in the presence of oxygen due to accretion of cupric fluorides. Monel K500 having higher strength may be even more.

Monel K500 is not age hardened. It is welded, overpressured and stress relieved. Age hardened tubes are used for 30000 psi process gauges.

Thousands of pressure gauges with Monel K tubes are used in refineries for several decades, for use in hydrofluoric acid alkylation units and other corrosive applications. This alloy is known for providing satisfactory performance in various corrosive conditions which occur in refineries.

It is also noted that some Hastelloy grades are more resistant but they are not resistant to SCC . Uniform corrosion is noticed in the refineries for which Monel grades are found to be performing better than any other alloy.