Iron, Nickel and Cobalt are the only ferromagnetic materials and the reason of why they strengthen the magnetic field induced externally can be understood from their electronic configuration. Considering the soft magnetic materials and their characteristics, the saturation induction rate is based on the chemical composition of the material whereas the permeability, remanence and coercivity are based on microstructure and hence on cold working, heat processing, grain  size and magnitude of impurities like carbon, oxygen, nitrogen and sulfur- the whole of this should be kept at the minimum possible level. The ferromagnetic metals such as iron, nickel and cobalt create the base of the materials, irrespective of the production technique used. 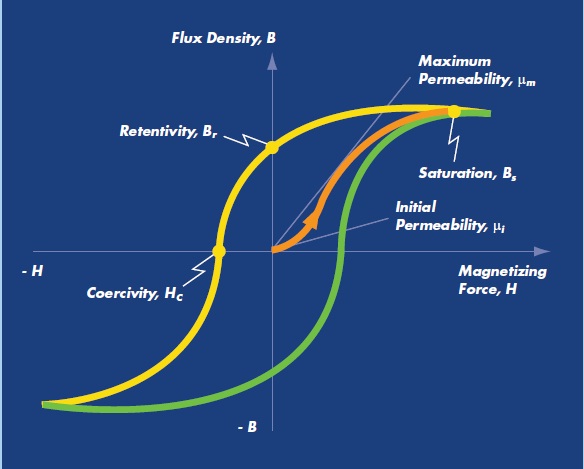 The combination of versatile material’s design and the variety of shapes with the process metallurgy procedure offer a new dimension to the production of magnetic circuits. Using the isotropic soft magnetic materials, the limitations can be discarded that are caused by two dimensional steel laminations.

The soft magnetic materials are made of powdered metal particles with an electrically insulating surface. The powder is pressed using a lubricant, creating an isotropic metal. The heat processing offers stress relief offering the strength while permitting the material to keep its insulating layer around each particle separately. The insulating layer prevents the eddy current from moving across the particles when the material is subjected to a variable magnetic field hence enhancing the responsive period. In addition of use in the transformer cores, soft magnetic alloys are also used in the electric motors.

Heanjia Super-Metals produce soft magnetic alloys in forms such as wire, sheet, strip, tape, mesh etc, for use in motors.

Powder technology based procedures are fit for the production of electro-technical and electronics parts. They are outstanding for the mass production of small parts, usually with a complicated shape and the tolerance needs are normally met after sintering, preventing the requirement for subsequent calibration. The materials utilized are powder metallurgically prepared soft magnets that are same as those utilized for the rolled products and iron – phosphorous and iron-silicon alloys and ferric stainless steels. Definitely specific process factors related with the powder metallurgy cannot be discovered in the sheet components.

Uses in variable magnetic fields above 50 Hz, non-sintered soft magnetic components offer high potential and cost-effective benefit. Because of net or almost net shape and high density design of the products, the magnetic characteristics of the transformer sheets are received however at the lower price.

Specifically in the frequency range above 2kHz, eddy current losses are lower than in the equivalent transformer sheets. Additionally for the production of new electrical engines 3d magnetic flux is of great significance. These two features are offered by PM soft magnetic components.

For use in coil cores where primarily eddy losses take attention and induction and permeability are less significant, the special components are utilized in addition with an adapted procedure.

By using the different materials and with the development of advanced procedures, Heanjia have succeeded in including a vast frequency range thus a broad series of applications.

Permalloy represents a series of Nickel-Iron (NiFe) alloys that are heat processed to exhibit extremely higher initial permeability as compare to pure iron. They are commonly produced in thin sheet form. Permalloy series displays outstanding soft magnetic characteristics and they have been extensively used in the electronic equipments and industry.

Over the past decade the mechanical milling and alloying method have became well popular to create several equilibrium and non-equilibrium alloy phases that offer more feasibility for research and use of permalloy.

Permalloy is an alloy with extremely high magnetic permeability, small coercive force, nominal core losses and small remnance by magnetic field annealing. It has applications in the magnetic shielding where fields extremely smaller than earth’s magnetism are needed. The bulk volume applications involving the use of lamination or tape wound cores are ground fault interrupter and modem transformer cores. Permalloy is used in the diverse high performance transformer core applications for example recorder heads and audio transformers. The control on the quenching rate while heat processing and superimposition of the different bake treatments are followed to produce the most suitable magnetic property for the desired application.

The small magnetostriciton is important for industrial applications, allowing its use in thin films that involve variable stresses which otherwise result in a disastrously extensive variation in the magnetic characteristics. The electrical resistivity of Permalloy may change up to 5% on the base of strength and direction of an applied magnetic field.

Permalloy has face centered cubic crystal structure with a lattice constant of about 0.355 nm in the nickel content about 80%. It doesn’t have sufficient ductility or workability hence the applications demanding elaborated shapes like magnetic shields are constructed using the high permalloy grades for example, Mu metal. Permalloy is utilized in the transformer laminations and magnetic recording heads.

Permalloy was discovered in the beginning of 20th century for inductive compensation of telegraph wires. Earlier in 1860, long conductors were used in transatiantic submarine telegraphs cables that caused damage and resulted in reduced signaling strength merely 10 to 12 words per minute. The suitable media for sending signals without loss were initially determined in 1885 by Oliver Heaviside. In 1902 the signal loss in cable was attempted to compensate by winding it with the iron wire, improving the inductance and using it as a loaded line to decrease loss. Although iron didn’t possess sufficiently high permeability to recompense the transatlantic length cable. Subsequent to a prolong search, permalloy was found in 1914 by Gustav Elmen in Bell Labs who discovered that it possesses larger permeability as compare to silicon steel. Further in 1923, he realized that the permeability can be further improved by heat processing. Winding permalloy tape could significantly increase the signal transmission speed. After the development of Permalloy, several applications in the electronic industry were discovered that involved the required features of permalloy.

Soft magnetic alloys specifically refer to materials that have characteristics such as small coercivity, small magnetocrystalline anisotropy and suitable saturation magnetization. It is usually highly desirable to keep small or zero magnetostriction, as any application subjected to an ac field will suffer from losses as field energy is changed into mechanical energy. Soft magnetic thin layers are normally formed from 3d transition metal ferromagnetic elements such as iron, cobalt and nickel and their alloys, specifically NiFe and CoFe.

The magnetic characteristics of soft magnetic thin layers are dominated by shape anisotropy, as the contribution of other anisotropy terms to the total energy is small. In case of metallically regular films, this results in magnetization stated in the film plane. If a well specified columnar structure is produced, then shape of columns specifies the anisotropy and it can cause any direct axis of magnetization perpendicular to plane.

For use of ferromagnetic materials in the variable magnetic fields with the passage of time as those found in alternating current applications, attention should be given to the influence of frequency on the behavior of the magnetic material. The calculated permeability is influenced by variable frequency. Moreover, the losses linked with materials that are subjected to the variable magnetic field should be taken into account.

An essential factor that grabs attention in determining the suitable magnetic material in AC applications is core loss. This term states the power loss in the core as it is subjected to the variable magnetic field. Generally, Core loss should be reduced to minimum by increasing the energy efficiency. Core loss can be stated as the total of hysteresis loss and eddy current loss.

The hysteresis loss can be referred as the energy required to sweep the domain walls. When a material is subjected to an alternating magnetic field, every cycle around the hysteresis loop needs a specific magnitude of energy that is directly associated to the area swept by hysteresis loop. It is based on the application frequency and hysteresis loop area of alloy. It is specified as:

Where Ke is a constant, d is a thickness of material, B is the induction level, f is frequency and p represents electrical resistivity of the material. The net core loss is calculated over a wide frequency range, the contribution of every component of loss to the total core loss changes. As hysteresis loss and eddy loss are functions of frequency to the first and second power, hysteresis enhances the small frequency losses and eddy currents overcome the high frequency losses.

To decrease the eddy currents, lamination steels are rolled as thin sheets to enhance the resistance and increase the penetration depth of magnetic area. The sintered milled material is not suitable for AC applications for suitable functionality.

Permalloy thin layers have a significant effect on the saturation magnetization is crucial to realize the magnetic nature of these alloys.

Permalloy is commonly used in the production of thin pieces for lamination to fabricate transformer cores. The proportion of nickel may vary from 35 to 90% on the base of properties required, and is around 78% for small power transformers.

Heanjia Super-Metals produce Permalloy alloy in the following forms in the standard and tailored specifications: