In this post, crevice corrosion resistance performance of Inconel and Hastelloy is evaluated in 3.5% NaCl solution at 60oC. The presence of chromium and molybdenum in these corrosion resistant alloys is found significant. It has been found that these elements have a crucial role in retaining and stabilizing the passivity of Inconel and Hastelloy grades respectively. Hastelloy is found completely resistant to crevice corrosion.

The presence of molybdenum in Hastelloy alters the surface nature from those consisting of nickel oxide that is more sensitive to corrosion to those comprising of corrosion resistant surface containing chromium oxide. The availability of chromium oxide decreases the crevice corrosion attack and improves resistance to such corrosion.

What is crevice attack?

Crevice mechanism is usually developed by a contact between unlike materials. The second material may be a part of connection for example fastener that is made from the same material for other. It develops crevice where accumulations of mud and oxides and other solid particles develop precipitates on the alloy surface. Corrosion due to crevice is caused by exposing such surface to atmosphere or by presence of moisture, the other surface far from the crevice can drain and dry. The crevice attack occurs by the same phenomena as pitting corrosion. Although as with entire types of corrosion, several factors are involved in influencing the attack rate such as corrosive conditions, their concentration and composition of alloy.

Crevice corrosion is a serious problem during the process of material selection particularly when the application media is aggressive. Various alloys like stainless steel grades, Inconel, Incoloy and Hastelloy offer excellent performance in the severely corrosive conditions for example marine water or high temperature media. However these alloys offer outstanding corrosion resistance in the severely attacking conditions, still there is a chance of crevice and pitting attack. The extent of attack and damage are based on the chemistry of alloys and the magnitude of corrosive agents.

Hastelloy and Inconel alloys containing Nickel, chromium and Molybdenum and nickel and chromium respectively are taken and kept at constant conditions and merged in water bath corrosion testing system at 60oC for 30 days.

The effect of alloying composition in both alloys can be specified only on the base of the crevice attack occurred at or down to 60oC. The extent of surface irregularity, the materials, and thinning processes occurred to produce the crevice influence the test outcomes.

Nickel alloys are uncommonly employed in the corrosive conditions as they quickly lose their security layer and are attacked by pitting and crevice corrosion. So it is important to include other elements into pure nickel for using in the vigorously corrosive conditions.

The alloy samples were observed after 30 days with normal eyes, Inconel alloy is found to be attacked by crevice whereas Hastelloy showed no crevice attack. 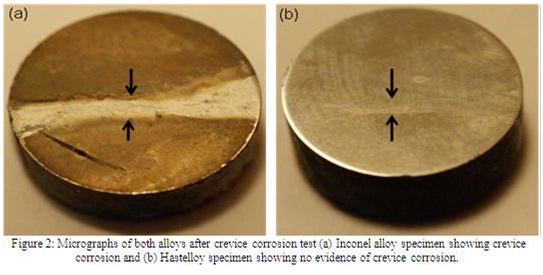 The key observations from this analysis state that chromium and molybdenum are responsible for passive status. The production of a passive layer on the surface normally occurred in both alloys in 3.5% sodium chloride solutions. Molybdenum precipitates the surface as an oxide within a pit, it delays and stops further pitting.

Inconel and Hastelloy were analyzed to determine the crevice corrosion attack. It is found that Inconel is prone to crevice and pitting attack whilst Hastelloy with inclusion of molybdenum and chromium there is no effect of crevice and pitting attack. The outcomes that proportion of Cr and Mo are responsible for passivation and stabilization of surface oxide layer and are particularly marked in Hastelloy.