Inconel 625 is known for its strength, outstanding fabrication, welding and excellent corrosion resistance properties. Prevention of corrosion of Inconel alloy 625 at the diverse temperatures and corrosive conditions is the basic need for its extensive acceptance in the chemical processing and other applications. This post shows the lab and field data about the resistance of Inconel 625 to the diverse aqueous media causing localized attack, stress corrosion cracking and other kinds of corrosion. The flexibility of alloy for use in oxidizing, carburizing, chlorinated solvents and simulated waste incinerator conditions comprise of halide species are shown.

Inconel 625, UNS N06625 is fit for use in the various intense attacking conditions. In the nominal conditions, like ambient conditions, fresh and marine water, neutral salts and alkaline media, there is no corrosion. In the variety of aggressive conditions, chromium offers resistance to oxidizing chemicals however high nickel and molybdenum concentration make alloy resistance to nonoxidizing conditions. The concentration of molybdenum makes Inco 625 resistant to pitting and crevice attack. The included niobium content stabilizes alloy against sensitization while welding, hence avoiding immediate intergranular attack. Moreover, high concentration of nickel offers resistance to chloride based stress attack. This pair of corrosion resistance properties makesInconel alloy 625 a commonly used material  in the chemical and aerospace sector. This post describes the performance of alloy in two sections as resistance to aqueous and high temperature attack.

Uniform corrosion, hence called general corrosion is a type of attack that is often distributed and proceeds at about the same rate over the complete metal surface. The analyses are made to determine the resistance to alloys to uniform corrosion primarily to help in the choice of materials. The tests are normally performed in the different acids to consider various situations. Following table describes the general corrosion resistance of the different alloys including In 625 in the various non-oxidizing and oxidizing acids. Few alloys that are suitably resistant to reducing acids such as Hastelloy B2 may not be fit for use with oxidizing chemicals. Although, In 625 is one of the resistant alloys to uniform attack and may be used in reducing and oxidizing acids.

Pitting is a type of localized attack that is limited to a small region instead the entire surface. Pitting and crevice attack or localized attack as related to ppm chloride content and pH of alloys are shown in the following figure: 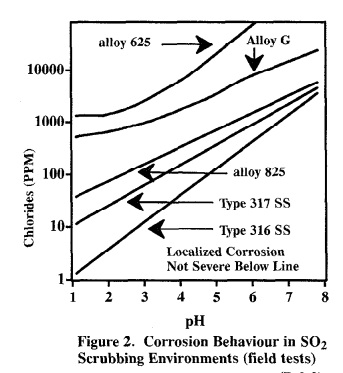 Inconel 625 and different alloys were analyzed in accelerated wet oxidation condition that comprised of a synthetic sewage with chlorides and fluorides, pH 3.2 and a temperature 292oC or 562oF as shown in the following table:

In 625 and other alloys mentioned containing nickel above 34% are extremely resistant to SCC in this media.

Sulfide stress cracking or SSC is an issue in the oil and gas units. It often causes brittle failure of a metal in stress in water mixed with hydrogen sulfide. SSC attack is shown in the following table for various alloys.

The analyses were made at room temperature under constant load in a mixture of oxygen free water comprising of 3000 ppm dissolved H2S, 5% NaCl and 0.5% acetic acid. The threshold stress of Inconel 625 is in close to yield strength in annealed and cold rolled conditions. The threshold stress, although is larger for few alloys in this condition.

An extent of inclination to hydrogen embrittlement was determined as a function of ductility loss. Inconel 625 possesses a moderate ranking as compared to the other alloys. Data made in pressurized gaseous hydrogen is described in the following table:

Tests in solutions of pH 1.4 – 9.5 with about 5500 pp, chlorides and 80oC or 176oF with power chlorine base oxidizers were made on 38 samples of different materials. It involved 8 chlorination stages,9 chloride dioxide stages and 3 hypochloride stage bleach unit conditions. From the above table, it can be seen that Inconel 625 and other extremely corrosion resistant alloys offer great prevention in bleach plant conditions. High chromium and molybdenum contents of Inconel 625 are responsible for its pitting resistance in this media.

However alloy 625 is popular for resistance to aqueous attack, it also offers suitable resistance to oxidation and scaling at the elevated temperatures. An oxidation analyses was performed through air plus 5% added water vapor moving at the speed of 500 cc/min at 1000oC or 1832oF for 1008 hours. Water addition through bubbling air by water controlled at 33oC or 91oF to develop 5% water vapor. Regularly the samples were pulled out of the furnace and weighed subsequent to quenching to room temperature to receive a mass variation as a function of time.

A cyclic oxidation analysis was performed on the elevated temperature alloys for example Inconel 601, 617 to determine the scale reliability. In this condition, cyclic oxidation analyses was performed at 982oC or 1800oF in which the samples were heated to temperature for 15 minutes and quenched in air for five minutes. The specimens were weighed subsequent to 100 cycles to receive the mass variation. The outstanding resistance of Inconel 625 to cyclic oxidation describes the potential of alloy to maintain the security oxide coating in the vigorous cyclic condition. Incoloy 800 must be stopped subsequent to 1200 cycles.

Development of stable oxide scale on the surface is a base of carburization resistance of a material. An analysis was made to find the relative high temperature carburization resistance of complex alloys utilized in the ethylene furnaces. The analysis involves subjecting alloys to a mixture of hydrogen and 1 – 3% methane at required temperatures. The samples are regularly eradicated for weighing by eradicating them to the cold end of the test chamber and flushed with argon to decrease oxidation. Inconel 625 offers outstanding resistance to carburization at 1000oC  in hydrogen gas – 1%Methane at 1000oC for 1000 hours. Mass variation in nominally oxidizing – carburizing condition, H2 – 5.5%CH4-4.5%CO2 at 1000oC or 1832oF for around 1000 hours. Inconel 625 offers comparable resistance to Inconel 600 and superior to alloys 800 and 600 in this condition.

Service of alloy 625 in chlorine based media

Chlorine is a main component in the various industrial process conditions for example mineral chlorination, ethylene dichloride and vinyl chloride monomer development, aluminum smelting and refining, fuel element treatment and heat recovery units. Elevated temperature halide attack has been noticed in fossil fuel boilers, coal gasification unit, gas turbines and in municipal and chemical waste incinerators. Municipal waste consists of 0.5% halides in dry form. Many lab analysis simulating waste incineration conditions have been limited to temperatures varying from 120 – 650oC or 248 – 1202oF. As nickel and nickel base alloys have a prolong reputation for their resistance to halogen attack. It refers to their significance in extending the temperature limit of lab data in simulated HCl conditions. The temperature limit chosen in this analysis is 593 – 927oC or 1100 – 1700oF. This limit is a standard for the flue gas temperature. The boiler interiors and flue stacks can specifically be considered to experience thermal exposure in this temperature limit. The considered condition for this analysis was Nitrogen-10% carbon dioxide-9% oxygen-4%HCl – 130 ppmHBr-100ppm SO2.

The tests were made in a 100mm dia mulllite tube in a horizontal electrical resistance furnace. The test samples were in the form of pins, 7.6 mm dia by 19 mm length. The samples of the whole alloys were subjected to 4% HCl conditions at 593, 704, 816 and 927oC or 1100, 1300, 1500 and 1700oF. The gas composition was developed by combining a gas mixture of nitrogen, sulfur dioxide, carbon dioxide and oxygen with hydrochloric acid and hydrogen bromide gases. The eventual gas chemistry was metered in the mullite tube with electronic flow controllers at an overall rate of 500 cc/min.

With high nickel, chromium, niobium and molybdenum concentrations, Inconel 625 offers good aqueous corrosion resistance in the variety of severe conditions. It is resistant to aqueous attack in the various media similar to alloys such as grade C-276.